As the alveoli are responsible for gas exchange, the composition of air that we inhale and exhale are different. Below is a table below that gives us the percentage volume of inhaled and exhaled air. The concentrations in the table are given in percentage form and not in the form of the number of particles.
From the table, we can see that the concentration oxygen is greater in air that is breathed in compared with air that is breathed out. This is because oxygen is taken into the blood stream in the alveoli, which are in the lungs. Also, we see that the concentration of carbon dioxide is higher in the air that we breath out compared to the air that we­­ breath in. This is because our cells are undertaking respiration reactions and a by-product of respiration is carbon dioxide. The carbon dioxide is taken from the cells that are respiring to the lungs via the blood stream. It is then breathed out in the lungs. Exhaled air tends to be warmer than the air that we breath in. It also contains a lot of water vapour. The amount of water vapour in atmospheric air depends on the weather conditions; if it is humid there is a large quantity of water vapour in the air and when it is not humid, there is a small quantity of water vapour in the air. ​​ 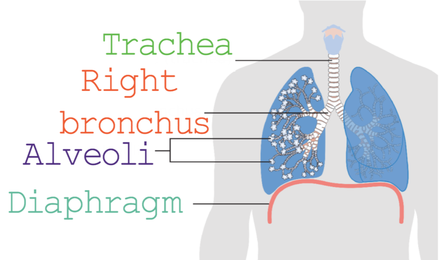 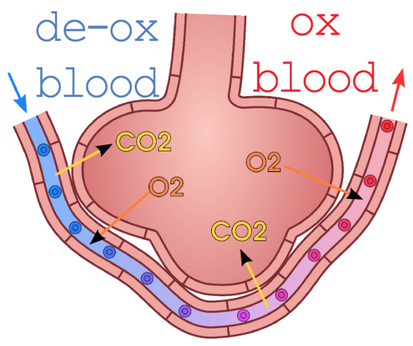 A 2D diagram of the alveoli
The lungs are part of the pulmonary circulatory system. This system is where blood is pumped from the heart, through the lungs and back to the heart. The blood in the capillary at the start of the alveoli is deoxygenated. This is because the blood has travelled around the body where it has supplied cells with the oxygen that it requires for respiration. Furthermore, the deoxygenated blood contains a large amount of carbon dioxide, which it has gained from respiring cells (remember that carbon dioxide is a waste product of respiration).