(4) Wooden trucks on a toy railway have permanent magnets that hold the train together.
The magnets are arranged so that an N-pole touches an S-pole between each truck, as shown in Figure 15.

(a) Truck Y is removed from the train, turned through 180° and is then replaced between truck X and Z.
​How does this affect the train? (1)

(b) The structure of a truck, seen from above, is shown in Figure 16.
The permanent magnets cause a magnetic field both inside and outside the truck.

Which of these correctly shows the field inside the truck? (1) 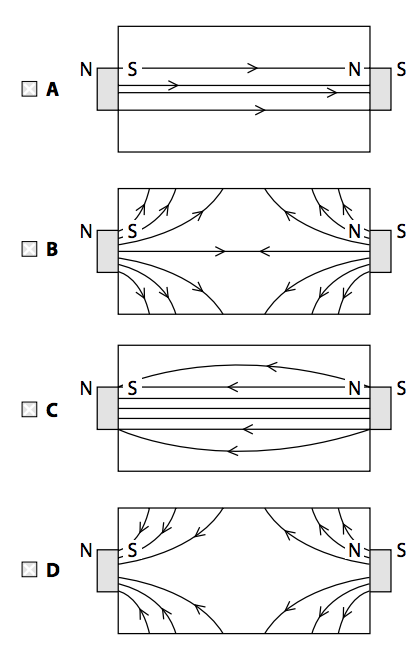 (c) A student investigates the forces between the trucks in the toy railway.
She places another truck, W, next to truck X.
She pulls truck Z in the direction shown by the arrow.
The whole train travels at a constant speed as shown in Figure 17.

The student repeats this method of adding trucks and pulling the train each time.
When there are seven trucks in total, the train comes apart between Y and Z when tested as shown in Figure 18.

(i) Explain why the train acts in this way by considering the forces involved. (2)

(ii) Devise an experiment to investigate the horizontal force needed to separate the trucks from the engine. (3)

(iii) Explain why a larger force is needed to separate the trucks from the engine if the force is applied at an angle to the horizontal. (2)