However, when the value for a is not 1, we need to use a different technique to factorise the expression. This technique is best explained through an example.
Example 1
Factorise the quadratic expression below.

The first step to factorise the quadratic expression is to multiply a (the coefficient of x2) by c (the constant term; the number at the end). a in the expression is 4 and c is 3. When we multiply these two together we get 12.

Here are the pairs of numbers that multiply to give 12: 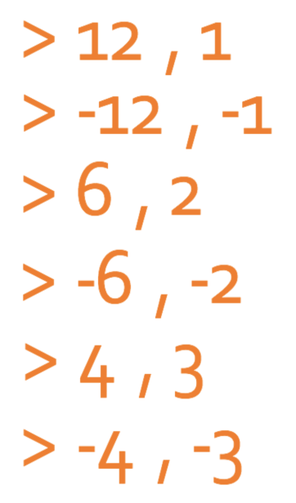 The only pair that adds to give 8 is 6 and 2. The whole point of finding this pair of numbers is so that we can replace 8x in the expression with 6x + 2x (which still gives 8x). It does not matter which way we sub 6x + 2x into the expression; we could have subbed it in as 2x + 6x. The expression becomes:

We can see from the above expression that both of the brackets are (2x + 1).

The first bracket in the final factorise expression will be the common factor of (2x + 1). The second bracket is the terms that are outside each of the brackets. 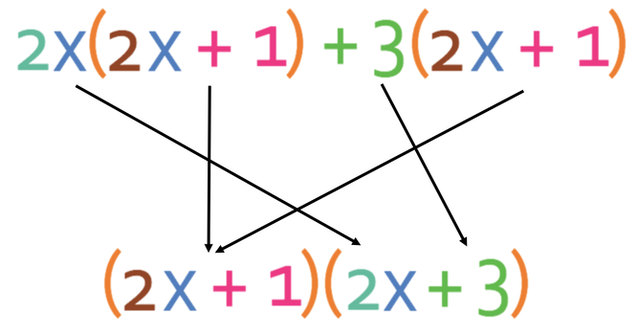 We are able to check whether we have factorised correctly by expanding the brackets. The working for the expanded brackets is shown below. 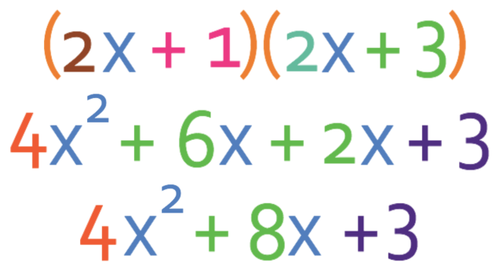 The expanded brackets gives the same expression that we were factorising. This means that we have factorised correctly.