When we are working out percentage change, we use the following formula:

We are able to find the difference by taking the initial amount away from the final amount.

The formulas above are very easy to use when we have a calculator. When we do not have a calculator, we will use the fraction part of the formula and then make the denominator of the fraction equal 100. It may be the case that you see slightly different versions of this formula. For example, the "final amount" is sometimes referred to as the "new amount".

​The question asks us to give our answer to 2 decimal places.

We are unable to use a calculator to answer this question, so we are going to get the denominator of the fraction to equal 100. Before we do this, let’s sub the values into their appropriate places in the formula. The initial price of the shirt is £25, and the new price (sale price) is £16. 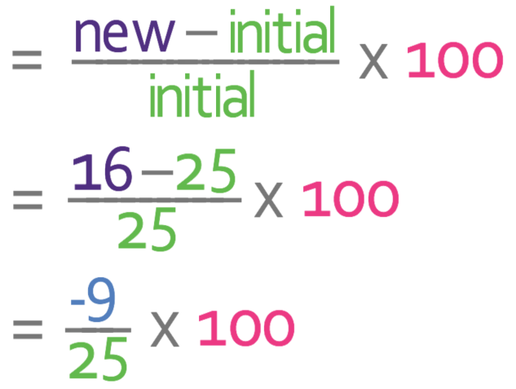 The divide by 100 (from the fraction) and multiply by 100 cancel one another out, which just leaves the numerator as the percentage.

We want to find the answer to 1 decimal place.