Atoms are tiny particles that make up every item in the world. Atoms are made up of three sub atomic particles:

A table showing the sub atomic particles and their charge and mass.
Protons and neutrons are found in the centre of an atom, which is known as the nucleus. The nucleus is tiny in comparison to the size of the rest of the atom. Electrons move around the nucleus in shells (see next section for a definition of shells). Electrons are smaller than protons and neutrons. The rest of the atom is made up of space.

A substance that is made up of only one atom is known as an element. There are over 100 different elements. Elements are represented by a one or two letter symbols. This makes it easier and quicker to write out formulas and chemical compounds.  It is the number of protons that determines what type of element an atom is. All atoms with the same number of protons are the same element. For example, all Hydrogen atoms have 1 proton and have the symbol H; all Carbon atoms have 6 protons and the symbol C. It is only the first letter of the symbol that is capitalised and the second letter must be lower case. For example, if we look at the symbol for Helium, it is He. 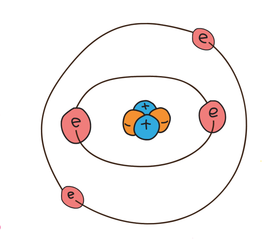 Electron shells.
Electron Shells
Shells can also be known as energy levels. Electrons travel around the outside of the nucleus (made up of protons and electrons) in shells. Shells are only able to hold a specific number of electrons. The first shell holds a maximum of 2 electrons, the second and third shell can hold 8 electrons. An electron will always want to fill the lowest energy levels (i.e. the closest shell to the nucleus). When a shell is full, electrons will start filling the shell just outside of the shell that is full. Shells do not have to be full and most elements have their outer shell partially filled.
The Periodic Table
The periodic table shows all possible elements. It is laid out in a special way so that the columns and rows tell us certain characteristics about the element. The rows signal how many shells (energy levels) are in use. Elements in row 1 have electrons in their first shell and no electrons in any of their other shells. Elements in row 3 have their first 2 shells completely full with electrons (2 electrons in the first shell and 8 in the second shell) and some electrons in shell 3. The columns show us elements that have certain characteristics. All the elements in group 1 (the first column on the left) have one electron in their outer shell. As they have the same number of electrons in their highest energy level, they react the same way. Group 1 elements react with water to form hydrogen and an alkaline solution and they all react with oxygen to form an oxide. Group 1 elements are Li, Na, K, Rb, Cs and Fr. Group 1 and 2 are known as the reactive metals. The elements in the far-right column have full outer shells. These are known as the noble gases and are stable. The noble gases are stable and unreactive because they have a stable arrangement of electrons. Their outer shells are full of electrons. 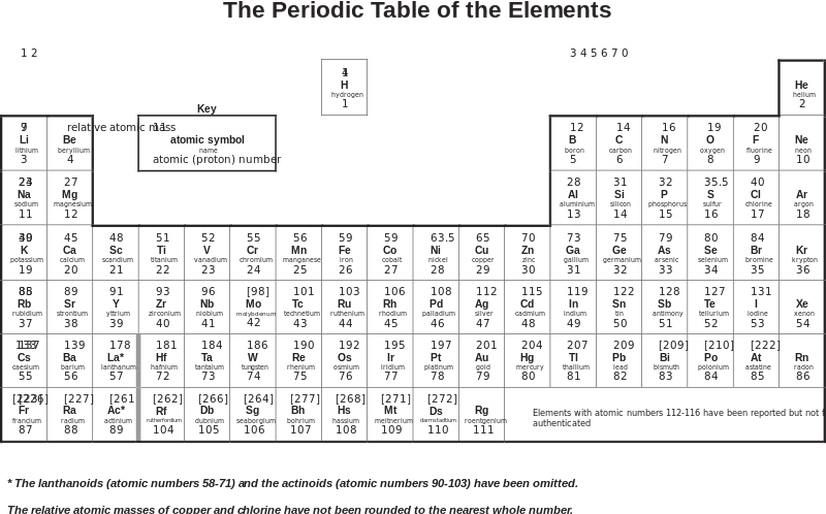 The periodic table.
Example - Carbon
Carbon has 6 protons, 6 neutrons (mass number – proton number; 12 - 6 = 6) and has 6 electrons (2 in the first shell and 4 in the second shell). We can draw out what carbon looks like. 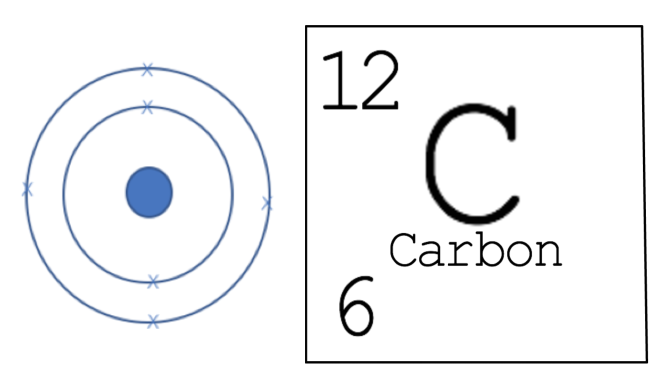 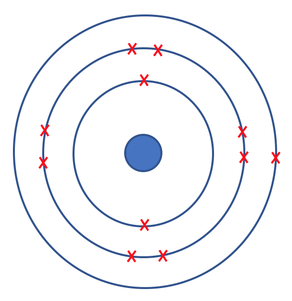 How the electrons are positioned for sodium.
Example - Sodium
For the exam students are expected to be able to draw out any of the first 20 elements. In order to do this, follow these steps:
The periodic table has a metal and non-metal split. It is a zigzag line, whereby all the elements to the right are non-metals or gases and all the elements to the left are metals.