Differentiation is the process where a cell changes to become specialised for the job that it is carrying out. Most human and animal cells differentiate early on in the cell’s life and they are unable to differentiate again to become a different type of cell i.e. if the cell becomes a red blood cell, they will stay being a red blood cell until the end of their life (the red blood cell will be unable to differentiate and become a different type of cell, such as a nerve cell). Many plant cells never lose the ability to differentiate, which means that most plant cells can change the type of cell that they are.
Stem Cells
Stem cells are undifferentiated cells, which means that they can develop into any cell. The cell that the stem cell develops into depends on the instructions that the stem cell is given. Stem cells are found in two places in humans.

One place where stem cells are found is in early human embryos (an unborn offspring). These types of stem cells are known as embryonic stem cells and they have the potential to turn into any type of cell.

Stem cells are also found in adults, but they are only found in certain locations like bone marrow. Bone marrow is found on the inside of some long bones in adults. Stem cells that are found in bone marrow are unable to turn into any type of cell. Instead they can only turn into a few types of cells, such as red and white blood cells. 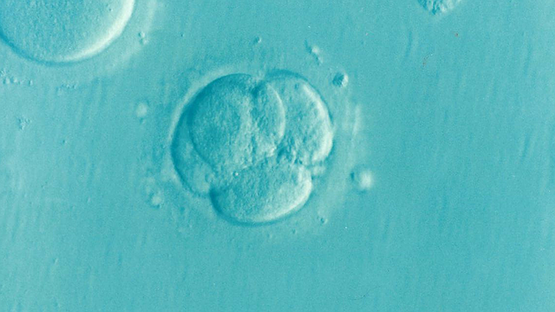 Meristems from plants can be produced quickly and cheaply. This means that rare species of plants can be protected from extinction. Furthermore, crops that are resistant to certain diseases can be cloned to produce large quantities of identical plants for farmers that will all be resistant to a disease. This will mean that farmers receive a good crop yield. 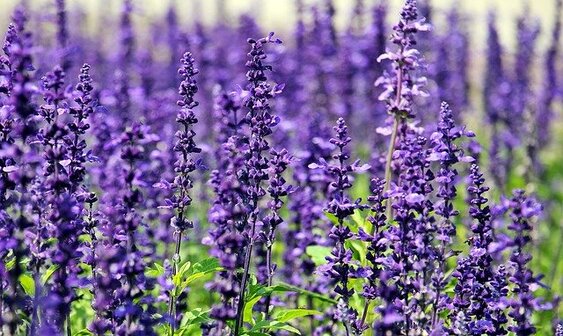 Furthermore, scientists can extract embryonic stem cells and grow them into a variety of different types of tissue. The grown tissue can be used to replace faulty tissue in the human body. For example, we could grow insulin producing cells for people who suffer from diabetes. We could also grow nerve tissue for people who are paralysed or suffering from nerve degenerative diseases. 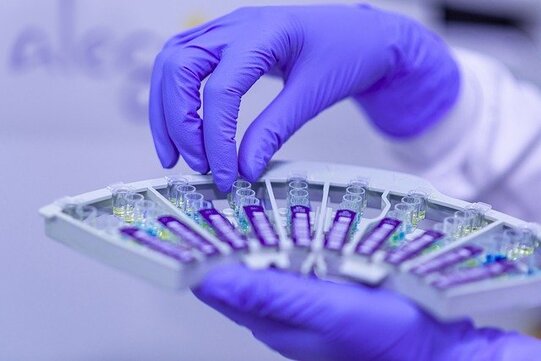 Therapeutic Cloning
The diagram below show the steps in therapeutic cloning. 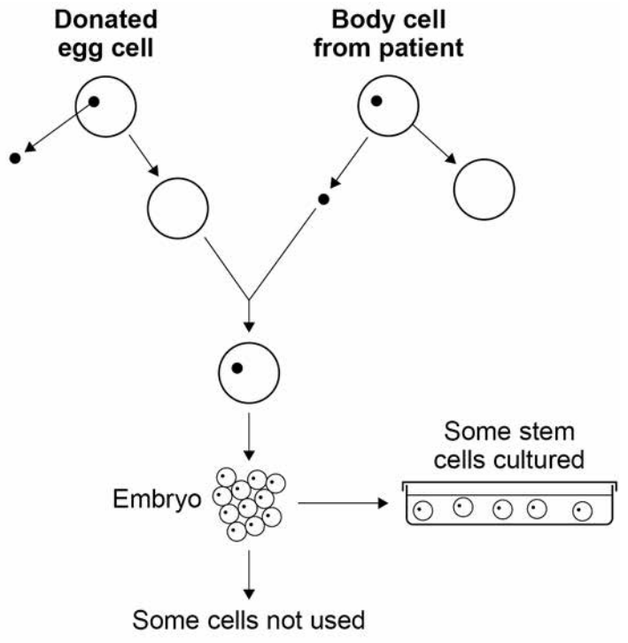 Therapeutic cloning is where the nucleus of an unfertilised egg is removed. We then removed the nucleus from a cell from the patient and insert this removed nucleus into the unfertilised egg that we have removed the nucleus from – the inserting of the nucleus into the unfertilised egg means that the egg has the same genetic information as the patient. The type of cell that the nucleus is taken from does not matter because the genetic information will be the same in all cells (providing that the cell is a diploid cell). The embryo with the inserted nucleus will start dividing and copying itself. After about 4-5 days, stem cells can be removed. The stem cells can then be grown into the type of cells/ tissue that is required for the patient. The advantage of growing tissue using the patient’s genetic information is that the patient’s body will not reject the tissue because the cells have the same genetic information. This means that the immune system does not attack the cells. However, if the tissue that was being transferred was from someone else, the transferred cells will have different genetic information, which may result in the immune system attacking them, thus causing the tissue/ organ to be rejected.
Issues with Stem Cells
Not everyone is keen on using stem cells. Some religious groups believe that it is immoral to use stem cells. This is because some stem cells are destroyed during the cloning process. Also, some people believe that embryos are alive and that it is ethically wrong to use them in this way. Furthermore, there is a risk of transmitting infections when we are removing cells from individuals and placing new cells/ tissue back into the body. However, the benefits from using stem cells are significant for the reasons outlined earlier. It may be the case that in the exam you are asked to examine the positives and negatives of using stem cells.