Back to B1 Home
​B1 H) Mitosis
Chromosomes & Nucleus
The majority of cells in the human body have a nucleus. The nucleus is where all of the genetic material (DNA) is stored. The nucleus is also responsible for controlling cell activity. The DNA inside the nucleus can coil up to form chromosomes. There are 23 different chromosomes in the human body, and each of these chromosomes contains many genes that are responsible for different characteristics, such as hair colour, eye colour and blood group.

A normal human cell will have two copies of each of these chromosomes; a normal human cell will have 23 pairs of chromosomes, which is 46 chromosomes in total. One of the sets of 23 chromosomes comes from the mother, and the other set of 23 chromosomes comes from the father. Cells that have 2 sets of chromosomes are known as diploid cells.
The Cell Cycle
The cells in our bodies are constantly dividing to produce new cells for growth and repair (replacing damaged cells).
The process of creating new cells is known as the cell cycle. The cell cycle takes 1 cell (known as the parent cell) and produces 2 cells (known as daughter cells). The daughter cells are genetically identical to each other and the parent cell; being genetically identical means that the cells have exactly the same DNA/ chromosomes as each other. 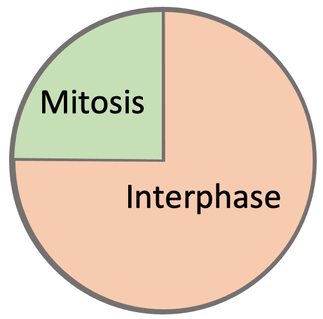 Interphase – Growth & DNA Replication
The DNA for cells that aren’t dividing is in long strands. Before a cell divides, the cell needs to increase the number of subcellular structures such as mitochondria and ribosomes. This is so that there are enough subcellular structures for the two daughter cells. Also, the cell needs to copy all of the genetic material so that there is one copy for each of the daughter cells. When the DNA has been copied, the DNA coils up to form X-shaped chromosomes.

Each side of the X-shaped chromosome is an exact copy of each other.

Mitosis
The mitosis process is shown in the diagram below. 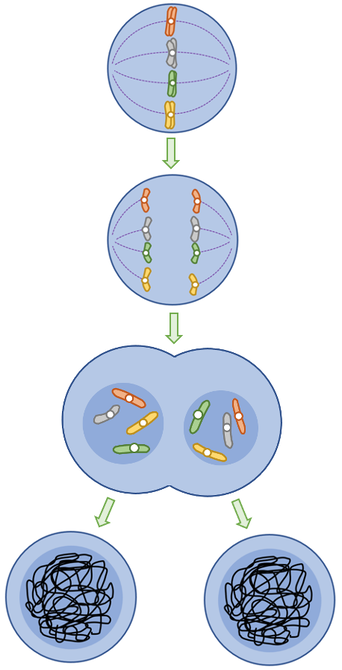 Membranes start to form around each of the sets of chromosomes at opposite sides of the cell. This creates the two nuclei of the daughter cells.

The final step in mitosis is that the cytoplasm and cell membrane divide to create two daughter cells that are genetically identical to each other and the parent cell.