Back to B3 Home
​B3 A) Communicable Diseases – Bacteria & Viruses
An individual with a disease has a reduced state of physical and mental wellbeing (health). There are two different types of diseases; communicable and non-communicable.
Communicable Diseases
We are going to look at some examples of different communicable diseases in this section and the next section. Just to recap, communicable diseases are diseases that can be spread between organisms, which can be from one person to another person, or between an animal and a human (or vice versa). Communicable diseases can be caused by bacteria, viruses, fungi or parasites. We will be looking at bacteria and viruses in this section. We will then look at parasites and fungi in the next section.
1) Bacteria
Bacteria are about a hundredth of the size of a normal human body cell. Bacteria multiply rapidly inside your body through mitosis. Bacteria produce toxins that damage body cells and make you feel ill. There are many different types of bacterial diseases and for the exam, you are required to know about salmonella and gonorrhoea.

Salmonella
Food poisoning is caused by the bacteria salmonella. Food can contain salmonella if it has been prepared in unhygienic conditions (e.g. not been refrigerated at the correct temperature), or if it has not been thoroughly cooked, or if the animal that the food came from caught the disease (for example, the chicken caught the disease whilst it was alive). Salmonella enters the body when an individual eats the food containing salmonella. When inside the body, the salmonella will start to multiply and release toxins (the toxins that the salmonella releases cause food poising). Individuals that are suffering from food poising may have stomach cramps, diarrhoea, start vomiting and have a fever.

Food poisoning tends to clear up after a few days. Whilst an individual is suffering from food poising, they must ensure that they do not become dehydrated. This is because if they have diarrhoea and are vomiting, they are losing a lot of water and electrolytes that need to be replaced. Severe cases of food poising will need to be treated by a doctor, but most of the time food poising can be treated at home.

We can take many actions at home that reduce the chance of an individual catching food poising. Here are some of the actions:
There are many other pre-emptive actions that producers of food can undertake to decrease the chances of consumers getting food poisoning. An example is poultry farmers giving their poultry a salmonella vaccine. The vaccine is to control the spread of the salmonella in chickens, thus reducing the chances of the chicken that the consumer eats having salmonella. 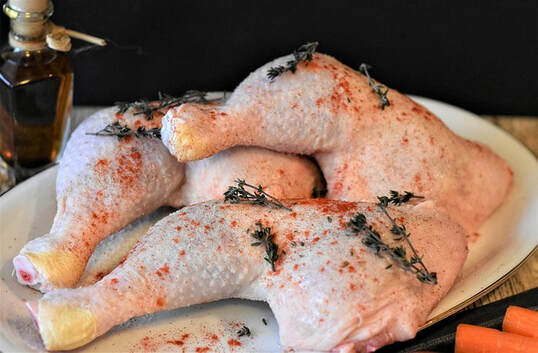 Gonorrhoea
Gonorrhoea is caused by the bacteria Neisseria gonorrhoeae or gonococcus. It is a sexually transmitted disease (STD), which means that it is passed on during sexual contact, such as unprotected sex. A suffer of gonorrhoea will have pain when they urinate, and they may even have a thick yellow or green substance come out of their penis or vagina (the thick yellow or green substance can be referred to as discharge)..

Individuals can reduce their chances of catching gonorrhoea by using contraception during sex (e.g. using a condom). Also, when an individual has gonorrhoea, they are advised to avoid sexual contact until they are given the all-clear from the doctor; this is so that they do not pass gonorrhoea onto anyone else.
2) Viruses
Viruses are not cells and are much smaller than bacteria – viruses are around a hundredth of the size of bacteria. Viruses reproduce themselves by invading a cell and high jacking the cell’s machinery to produce many copies of themselves. Eventually, there will be too many of the viruses in the cell, which results in the cell bursting releasing all of the viruses that were inside the cell. The viruses then invade more cells and the process repeats. The damaging of cells is what causes you to feel ill when you have a viral infection. Example of viral diseases are influenza (common cold), coronavirus, chicken pox, mumps, measles, HIV, tobacco mosaic virus etc.

Measles
Measles is a viral infection. It is usually spread by infected individuals coughing or sneezing in air which results in droplets containing the virus being suspended in air. Other individuals then breath in the droplets containing the virus and become infected. The effect of measles varies dramatically. Mild cases of measles can result in the development of a rash and a fever. However, measles can become very serious if there are complications; sometimes it can lead to pneumonia, infertility in adults that have not caught it as a child and potentially brain damage (called encephalitis). Most children in developed countries are vaccinated against measles (2 doses of the MMR vaccine protects 99% of individuals against serious cases of measles). However, not all children across the world are vaccinated.

HIV
HIV stands for human immunodeficiency virus. It is transmitted between individuals by exchanging bodily fluids, which can happen during sexual contact (unprotected sex) or the sharing of needles when taking drugs (usually recreational drugs). After an individual has contracted HIV, they usually develop mild flu-like symptoms. These symptoms will pass and the individual that has been infected will probably not know that they have HIV. Overtime the virus will attack immune cells (white blood cells), which reduces the body’s ability to fight off other infections. At this point, the virus is known as either late stage HIV or AIDS (Acquired Immune Deficiency syndrome).

Currently, there is no known cure for HIV/ AIDS but scientists are working very hard to find a cure. When an individual has been diagnosed with HIV, they can be given antiretroviral drugs, which slows the development of AIDS.

Tobacco Mosaic Virus
Tobacco mosaic virus is a virus that affects tobacco plants and other closely related species of plant (like peppers and tomatoes). The virus causes a mosaic pattern to develop on the leaves, which discolours the plant. The discolouring of the leaves reduces the plant’s ability to photosynthesise, which means that infected plants will not grow properly (photosynthesis is the reaction of carbon dioxide and water to produce glucose and oxygen). Crops that have tobacco mosaic virus will produce smaller yields (e.g. the farmer will harvest less tomatoes). Tobacco mosaic virus is spread through contact between plants both naturally and by contact from the farmer. 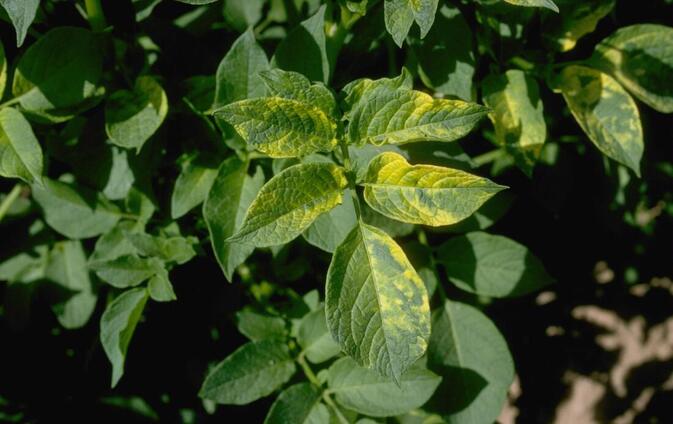