Gametes are created by a process known as meiosis. Meiosis involves 2 cell divisions and produces 4 gametes that are all genetically different. In humans, meiosis only happens in the reproductive organs, which is the testes for males and the ovaries for females.
The Meiosis Process
You do not need to know the steps in meiosis in a huge amount of detail. You just need to know what is explained below. 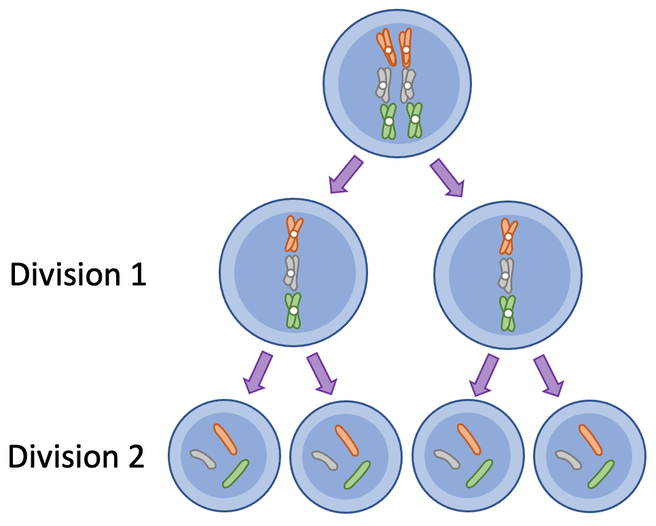 ​During the second cell division, both of the two cells divide into two cells, which results in 4 gametes. These gametes have one of each of the chromosomes; each gamete has 23 chromosomes. All of the 4 gametes produced are genetically different to each other. This is because the gametes will have a mix of the parent cells’ mother’s and father’s chromosomes.
Fertilisation
Fertilisation happens when a sperm and an egg meet. Fertilisation is also known as gamete fusion. Fertilisation restores the normal number of chromosomes; the result of fertilisation is a single cell with 23 pairs of chromosomes, which is 46 chromosomes in total. The fertilised egg then divides by mitosis to create an exact copy of itself with the full set of chromosomes (23 pairs or 46). The process of mitosis keeps repeating to produce many genetically identical cells, which we call an embryo. As the embryo develops, the cells start to differentiate into different specialised cells such as skin cells, blood cells, hair cells etc.