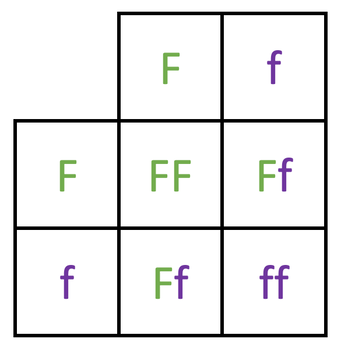 We are now going to have a question.

Question
A heterozygous individual and an individual who does not have polydactyly have a child. What is the percentage chance of the offspring having polydactyly?

We now have the genotype of both parents; Dd and dd. We can now draw the Punnett square. 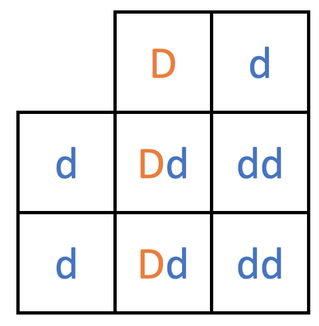 ​From the Punnett square we can see that 2 of the offspring are heterozygous and 2 of the offspring are homozygous recessive. Polydactyly is caused by a dominant allele, which means that the 2 heterozygous offspring will have polydactyly. The 2 offspring that are homozygous recessive will not have polydactyly. Therefore, 2 out of the 4 offspring have polydactyly, which means that the percentage chance that the offspring will have polydactyly is 50%.
Screening Embryos
We are able to screen embryos to detect whether the embryo contains any genetic disorders such as cystic fibrosis. The screening of embryos involves taking a few cells from the embryo and analysing the genetic information to see if there are any genes for genetic disorders present. We are able to screen embryos from IVF (fertilisation in a lab) and from embryos in a womb.

If the embryo does contain any genetic disorders, the embryos from IVF will probably be destroyed and the embryos inside a womb may be terminated (the pregnancy will end and a child won’t be born). It is because of these reasons that the screening of embryos is extremely controversial, especially amongst religious individuals who believe that life starts when a sperm and an egg fuse together to form an embryo; these individuals probably class the implications of embryo screening (destroying the embryo during IVF and terminating a pregnancy) as murder. Also, the screening of embryos implies that some genetic disorders are undesirable, which creates conflict and prejudice. Furthermore, individuals may want to screen the embryos for more than just genetic disorders; for example, screen the embryos for hair or eye colour etc… However, at the moment there are laws that prevent this from happening; currently, parents cannot even know the sex of the offspring (unless the sex influences the health of the offspring). A final negative is that it is quite an expensive process.

To conclude, the screening of embryos is a very controversial topic with many valid points for and against.