We can remember the order of these different subdivisions by remembering; Kids Prefer Candy Over Fresh Green Salad (kingdom, phylum, class, order, family, genus and species).

Let’s have an example of a tiger being classified.

Organisms are then named using Latin by the binomial system of genus and species. Humans are homo sapiens; the “homo” is our genus and the “sapiens” is the species.
Changes to the Classification System
The Linnaeus classification system relied solely on human judgment to classify organisms. Overtime technology has advanced, which has meant that we can understand organisms and their internal structures in more detail. This is because we can now use microscopes, biochemistry and DNA to help us classify organisms as accurately as possible.

In 1990, Carl Woese developed a new “three-domain system”. This new system came about because of new chemical analysis techniques, which found that some organisms that were closely related in the old classification system are actually further apart than was first thought. In Carl Woese “three-domain system” the organisms are first split into three domains (large groups). These three domains are:
Each of these domains are then subdivided into kingdom, phylum, class, order, family, genus and species.
Evolutionary Trees
Evolutionary trees show how organisms are related to each other. Scientists use current classification data for living organisms (such as DNA analysis and biochemical processes) and fossil data for extinct organisms (extinct organisms are organisms that are no longer around). An example of an evolutionary tree is shown below. 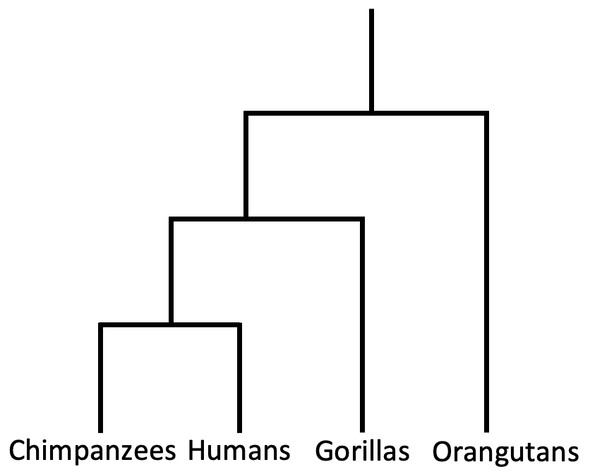