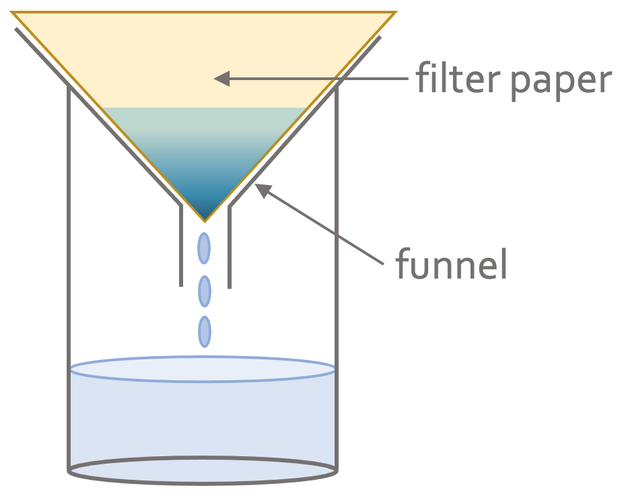 An example would be the filtering of a mixture of water and sand (sand is insoluble in water). The first step in separating the water and sand is to pour the mixture into the funnel that is lined with filter paper. The water will pass through the filter paper into the beaker (the water will be the filtrate). The sand will be unable to pass through the filter paper and will be left on the filter paper as residue.
Soluble Solids
Soluble solids are solids that dissolve in a liquid. We can separate a soluble solid from a solution in two different ways; evaporation and crystallisation. Both of these ways remove the solvent (the liquid) from a solution (which is a liquid with a soluble solid dissolved in the liquid). The methods for evaporation and crystallisation are very similar.

Evaporation
Evaporation is the quicker of the two methods. We set up the apparatus like what is shown below. 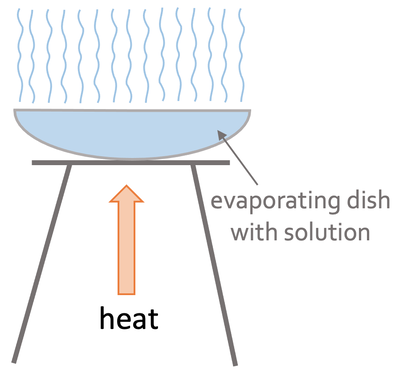 The start of crystallisation is exactly the same as evaporation. We pour our solution into an evaporating dish and gently heat the solution using a Bunsen burner. The heating causes the solvent to start evaporating. After some time, we will notice crystals starting to form in the solution; this is known as the point of crystallisation. When this happens, we remove the evaporating dish from the heat and leave the solution somewhere to cool. The soluble solid will start to form larger crystals as the solid becomes insoluble in the cool more concentrated solution (the solution is now more concentrated because some of the solvent has evaporated). We then filter the crystals out of the solution, and leave the crystals in a warm place to dry (we filter the crystals by using the same method that was outlined at the start of this section). We can speed up the drying process by placing the crystals in a drying oven or a desiccator.

The solution that has passed through the filter paper (the filtrate) is water with dissolved salt. We can separate the salt from the water by using evaporation. We pour the filtrate into an evaporating dish and heat it up using a Bunsen burner. The heat will cause the water to evaporate, which will leave us with salt crystals. Instead of evaporation, we could have used crystallisation to obtain the salt crystals (the salt in rock salt won’t break down or react when heat is applied, but if the salt did break down or react when heat is applied, we would have had to use crystallisation instead of evaporation).

We now have separated the sand and salt in rock salt.