P5: Quiz 14 – Answers
1) The resultant force of an object is the overall force acting on an object in one direction 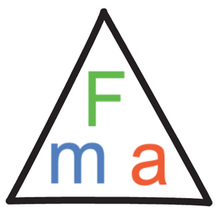 a) The law of inertia is also called Newton’s first law, which is that an object’s motion will remain the same unless a resultant force acts on the object

b) Inertia mass is a measure of how difficult it is to change the velocity of an object. The formula for inertia mass is m = f ÷ a or m = f/a


3) The ball below is stationary and there are two forces acting on the ball.

a) Find the resultant force acting on the ball.

a) What is the equation for Newton’s second law? Include the units for the variables in your formula.

b) How would you describe the relationship between resultant force and acceleration; directly or inversely proportional?

c) How would you describe the relationship between acceleration and mass; directly or inversely proportional?

7) An object has a mass of 600 grams. A force causes the object to accelerate at a rate of 1.2 m/s2. Calculate the size of the resultant force.

8) A ball has a mass of 6 kg. Find the acceleration of the ball when there is a resultant force of 18 newtons acting on the ball.

10) A car that has a mass of 1,600 kg is travelling towards the right. It has a driving force of 5,000 newtons, and the total resistive forces are 4,200 newtons. The diagram below shows these forces acting on the car.

11) A car is approaching a set of traffic lights at a velocity of 18 m/s. The lights turn red and the car decelerates and comes to rest. It takes the car 5 seconds to stop. The car has a mass of 1,700 kg.
a) Work out the deceleration rate.
b) Calculate the (braking) force applied by the brakes to cause the car to stop.


13)
a) What does inertia mean?
b) What is inertia mass? Give the formula/ equation for inertia mass.
Back to Questions