Back to P5 Home
​P5 V) Reaction Times
Reaction times are generally between 0.2 and 0.9 seconds. Reaction times are affected by many different factors such as drugs, tiredness, age, distractions, caffeine and many more. We can investigate how these factors affect reaction times by using the ruler experiment or a computer.
Ruler Experiment
The ruler experiment involves two individuals; A and B. A is the individual doing the testing, and B is the individual that is having their reaction time tested. The person being tested (B) rests their forearm on a table with their hand slightly over the edge of the table (we use a table so that the individual being tested is unable to move their forearm). 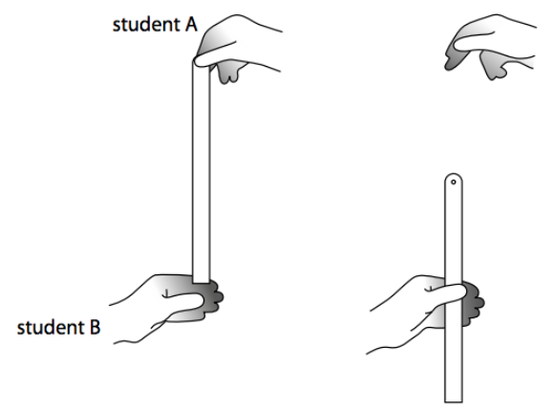 Step 1 – Final Velocity
The aim of the first calculation is to find the final velocity of the ruler by using the formula below.

We want to find the value of v and not v2. Therefore, we square root both sides of the equation. 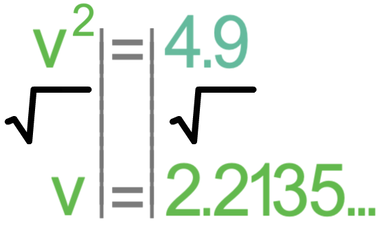 We now round our answer to 2 significant figures.

Therefore, the reaction time is 0.23 seconds to 2 significant figures.

Computer
We can get a more accurate reaction time for an individual by using a computer with a reaction time program installed on the computer. The reaction time program would ask an individual to click the mouse or press a button as soon as a stimulus appears on the screen. The program will then measure the time between the stimulus appearing and the mouse being clicked/ button being pressed. The stimulus on the computer will randomly appear, which removes any anticipation from the individual being tested, thus meaning that the computer program gives us a truer reaction time compared to the ruler dropping experiment (in the ruler dropping experiment, the individual may anticipate when the ruler is dropped, which will affect the value for reaction time). Also, the computer can measure reaction times more accurately as it can measure reaction time in milliseconds. Furthermore, there is no possibility of human error when using a computer.
Investigating What Affects Reaction Times
We can investigate how different factors affect reaction times by completing the experiment twice; the first time will be the control test, and the second time will be where we change a factor that may affect reaction time. We then compare the results from the two experiments to see what affect the factor has on reaction time. Here are some of the factors that we can investigate to see what affect they have on reaction times; we only make these changes for the second test – the first test will be the control.
For all of the modifications above, we would only change one variable and keep all of the other variables constant (the same). For example, we would need to use the same table, the same ruler etc. Also, we would need to make sure that the individual is in the same state ignoring what we are changing/ investigating. For example, if we were investigating the effects of tiredness on reaction times, we would not want the individual being tested to have consumed any substances that we are not testing for (caffeine or alcohol) between the first test and the second test; this is because the consumption of other substances will influence the individual’s reaction time.