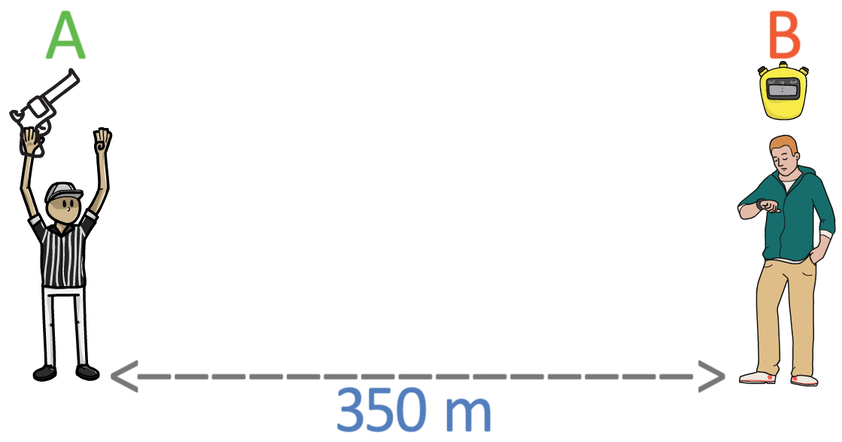 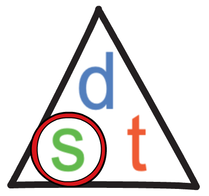 The speed of sound from their experiment is 318 m/s.

The actual typical speed of sound in air is 330 m/s (it is worth writing this down on a revision card).

Issues with this Experiment
This experiment is not the most accurate way of working out the speed of sound. This is because the time between seeing and hearing the bang has been measured by humans, which means that the time will be influenced by reaction times. If you have completed this experiment at school, you will have noticed that despite all of your class members watching and hearing the same gun being fired, they will all have different values for the time between seeing and hearing the bang. The range of times amongst your class members will mean that we will have a range of values for the speed for sound.
Experiment 2
The second experiment uses an oscilloscope to measure the speed of sound. We connect a signal generator to a speaker to create sound with a known frequency (the frequency is the number of full waves that pass through a point per second). We then connect two microphones to an oscilloscope. The oscilloscope will show the waves detected from each of the microphones. The setup for the experiment is shown below. 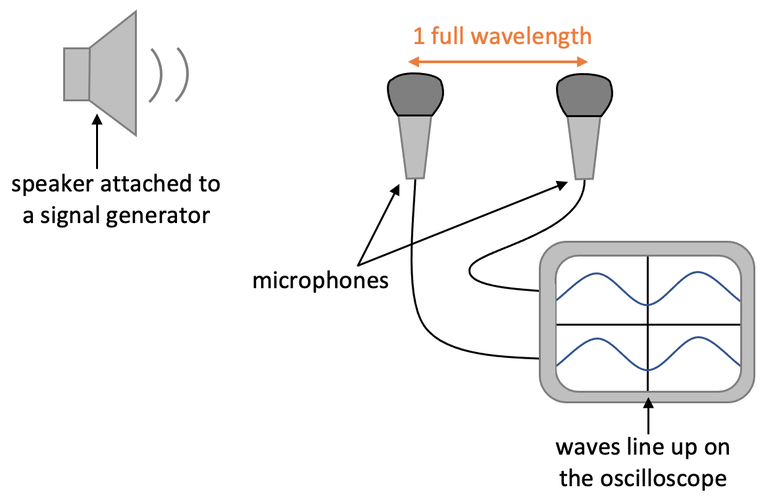 We can work out the speed of the wave by multiplying the frequency (which we get from the signal generator connected to a speaker) by the wavelength (the distance between the two microphones).

Example
A student investigates the speed of sound by using the method that is outlined above. She sets the frequency on the signal generator to 1.2 KHz. The distance between the two microphones is 27.5 cm. Find the speed of the sound wave.

We find the velocity of the sound wave by multiplying the frequency by the wavelength.

​The speed of the sound wave is 330 m/s.
Experiment 3
The next experiment will involve using a ripple tank. We can use a ripple tank to find the wavelength, speed or frequency of a wave. 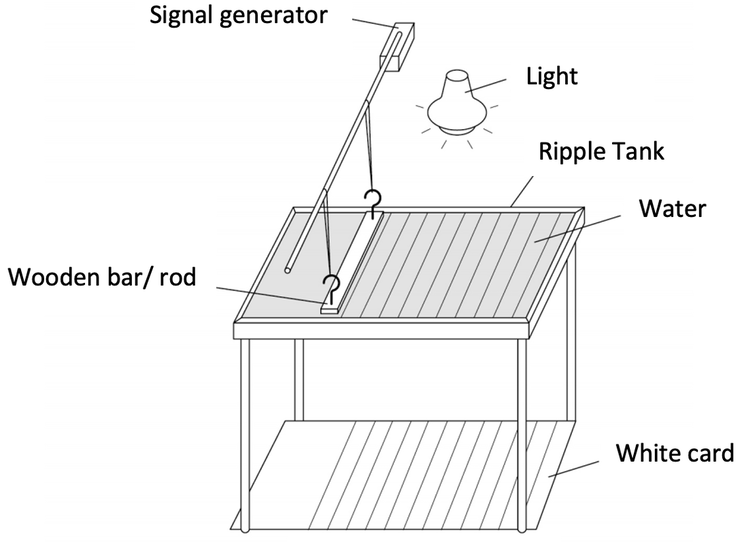 Before we carry out the experiment, we need to add some water to the tank so that the depth in the tank is around 5 cm. We then turn the signal generator on and adjust the wooden bar/ rod so that it just touches the surface of the water. The final step is to turn the lamp on and turn off the lights in the lab/ room so that it is clearer to see the shadows created on the white card below the ripple tank.

We can then work out the speed of the wave by multiplying the frequency by the wavelength.

I won’t go through a mathematical example as it will be very similar to the previous examples. But there is a mathematical question in the quiz for you to have a go at.
Experiment 4
The final experiment involves waves on a piece string. During this experiment, a signal generator is attached to a vibration transducer, which is attached to some string; this will cause the string to vibrate. The string from the vibration transducer goes over a pulley and has some masses/ weight attached to the end of it; the masses/ weight ensures that the string is kind of taught. The general setup for the experiment is shown below.

There are two slight modifications that we can undertake for this experiment.

Modification 1 – Adjusting the Frequency
The first modification that we are going to look at involves adjusting the frequency. We start the experiment by turning the signal generator attached to the vibration transducer on, which causes the string to start oscillating. We then adjust the frequency of the signal generator until we see clear waves on the string; there will be parts of the waves on the string that stay in the same position. We will see something like what is shown below.

The mean half wavelength is 12 cm. We now double this to find the full wavelength.

The full wavelength is 24 cm.

We would then be able to find the speed of the wave by multiplying the frequency (which we know from the signal generator/ vibration transducer) by the wavelength (what we have just worked out).

Modification 2 – Moving the Bridge
The first modification involved changing the frequency of the signal generator. In this modification, we are going to add in a wooden bridge; this is shown on the diagram below.

We now switch on the signal generator attached to the vibration transducer, which causes the string to start vibrating. We then move the position of the wooden bridge until we can see clear waves on the string; there will be parts of the waves on the string that stay in the same position. We will see something like what is shown below.