Fixed costs – these do not change with the level of production and are expenses that the company has to pay independent of the business activity. One example is rent. Suppose a firm had to pay rent of £40,000 a month for a factory, it still has to pay it whether it produces at full capacity or if it produces nothing. Other examples include business rates, staff that are paid salaries and depreciation of capital (down to age not use). We have both total fixed costs and average fixed costs. Total fixed costs are the sum of all of the fixed costs. Average fixed costs are the total fixed costs divided by the output.
Suppose we have a firm that sells go-karts and it has the following fixed costs (all in per month figures):
1.     Rent - £20,000
2.     Salaries staff - £15,000
3.     Business rate - £5,000 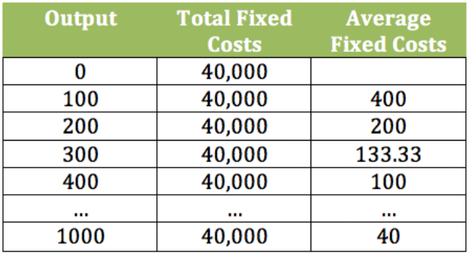