The formula for Income Elasticity of Demand.
We have various types of goods. ​ 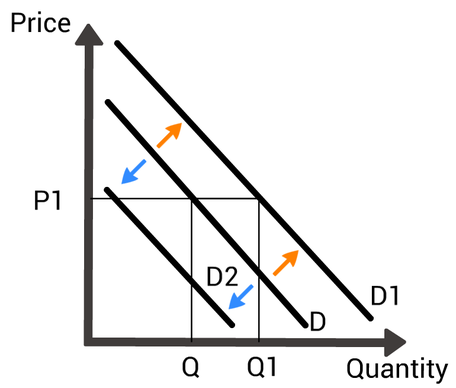 With a normal good, an increase in income will shift demand outwards (D to D1 [orange arrows]). A decrease in income will shift demand inwards for a normal good (D to D2 [blue arrows]).
Normal Goods
​One type of good is normal goods. These have a positive income elasticity of demand, which means that as a consumer’s income rises, so does the demand for a good. This is represented by an outwards shift of the demand curve. If income was to fall, then the consumer would demand less of the good at all price levels; an inwards shift of demand.

Normal Luxuries
Within normal goods we have normal luxury goods such as sports cars, fine wines, chocolate, smart phones etc… these show an income elasticity of demand greater than 1. As an individual’s income increases, they have more disposable income to spend on luxury goods. If your income falls, then luxury goods tend to be the goods that individuals cut quickest. For example, suppose my income halved I would stop eating out (a luxury good) and focus my spending on necessities like food and bills.

Normal Necessities
These are goods where demand rises if income rises but not to the same extent. This means that income elasticity of demand is between 0 and 1. An example would be petrol or fruit. If your income increases, you will demand some more of these goods but you would not increase your demand dramatically.
Inferior Goods
Inferior goods are those goods or services that usually have a superior good available. For example, low priced food is usually seen as an inferior good compared to premium goods. As the income levels of consumers fall, the demand for inferior goods increases, meaning inferior goods have negative income elasticity. During the recession, many consumers chose to switch from buying their groceries at Tesco, Asda and Sainsbury’s and instead chose to shop at discount places like Lidl, Aldi and B&M.
Tastes
Taste is a factor that influences demand. A change in taste can come about because of social and emotional factors. These can be because of advertising or endorsement by celebrities. In addition, if there was more information, which came to light over the consumption of a good, it could affect the demand for that good. For example, cigarette advertising and education has changed people’s attitudes towards smoking and this has influenced demand (demand has decreased because consumers are more aware of the effects of smoking. Demand has shifted to the left).
Expectations
Expectations are key in Economics. Economic agents are always formatting expectations. If consumers expect there to be a release of a new product, such as a new phone with a bigger memory and longer battery, they may choose to delay their purchase. Also, if individuals believe that the price of a good will increase in the future, they may choose to buy now instead of buying later. In addition, if a worker is worried about his job security or the future, they may choose to decrease their consumption now as a precaution even though they haven’t yet lost their job.


Expectations in the economy are crucial.