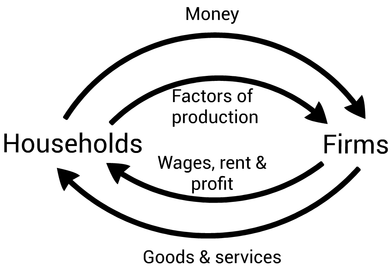 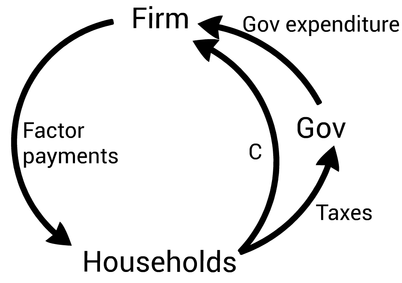 An economy with firms, households and a government.
Government
Now I’m going to introduce the government into our economy. Governments receive revenue through taxation, which it can receive from firms through corporation tax, or from consumers through income tax and VAT on goods and services. This flow is known as a leakage because money is leaving the system. The government then chooses how it wishes to spend the money that they have generated. They can choose to keep all of the income that they have generated or they can choose to inject the money back into the system (an injection). An example of an injection by the government would be government purchases and social transfers. Social transfers are a flow of income from the government to households and include job seekers allowance, tax credits, child payments and many more. ​ 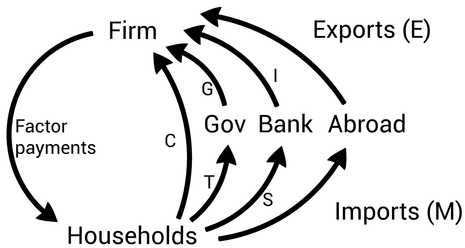 An open economy that can now export and import goods.
Open Economy
The above analysis has been carried out in a closed economy. A closed economy is where no activity is conducted with outside economies, meaning that there are no imports or exports. In reality, most economies are open and we can include the rest of the world into our circular flow of income. Income can leave our economy by households demanding goods and services that have been made by another country (imports). Imports are a leakage to an economy. At the same time income can flow from the rest of the world to firms by the purchasing of goods and services from the rest of the world (exports). Exports are an injection into an economy.
Circular Flow of Income and Aggregate Demand
From our circular flow of income we can see our components of aggregate demand (AD): consumption from households to firms, investments from banks (from household savings) to firms, government expenditure through social transfers or government purchases and imports and exports.  Aggregate demand will be discussed in more detail in a later section